Marbat – The Festival Celebrating Triumph of Goodness Over Evil 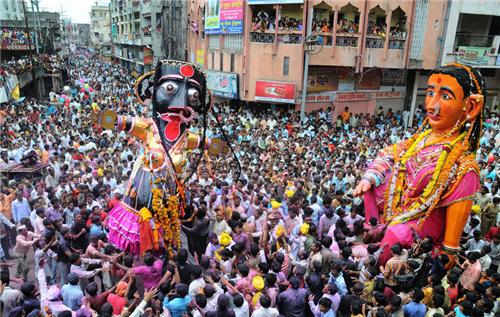 Marbat is celebrated only in Nagpur, a festival that the people of this city celebrate with full fervor and enthusiasm. The main intention behind celebrating Marbat is to safeguard the city from the attack of vicious evil spirits. Different events such as dance, drama, etc are organized by the people of this region to rejoice the victory of good over evil.

One major aspect of this festival is the huge statues of evil spirits constructed by the people, which are later taken out in rallies. During this festival, such rallies can be found in every corner of the Nagpur city. After the statues are taken around all the areas, they are burnt in the presence of the area’s people. This ritual of burning the statues signifies the end of evil forces. Preparations for Marbat begin in every household days before the festival, like cleaning of the house, collecting funds for the celebration, preparation of special dishes, ordering new clothes, ornaments, and a lot more.

The Marbat festival was conceptualized in the year 1885, incidentally the year in which the Indian National Congress (INC) was formed. During that time when Tilak encouraged Ganeshotsav to bring people together against the British, Mahatma Gandhi’s 'Chale Jao' call against the Britishers was successfully promoted via the Marbat procession by the Tarhane Teli Samaj.

However, there is also a mythological angle to this festival. The Kali and Pivli Marbat (idol) represents Putna, the maternal aunt of Kans who attempted to kill Lord Krishna on Pola, which in turn gave birth to this festival. The festival also represents protests against Bakabai Bhonsle from the Bhonsla dynasty, who was accountable for the entry of Britishers to the Nagpur city.

The custom of taking out the processions of 'kali' (black) and 'pivli' (yellow) Marbats a day after the bullock festival of 'Pola' each year, dates back to the 19th Century in the eastern part of Nagpur.
The 'Kali Marbat' depicts Bhonsla queen Bankabai who surrendered to British power, while the 'Pivli Marbat', which earlier depicted the atrocities of British rulers, symbolizes social evils such as corruption and epidemics in the modern times.

The Marbat festival is being celebrated for more than a century now. Before India gained independence, the festival was primarily a way to arouse feelings of patriotism among people. It was used as a platform for raising voices against the British colonial rulers. Post independence, the significance of the Marbat festival has changed completely. Today, people use this festival to draw the government’s attention towards various social issues. People surface pressing issues which the government needs to give utmost importance to, like terrorism, natural calamities, diseases, etc.

The huge statues of evil spirits are the main attraction of this festival. Another attraction of the Marbat festival is a number of 'badgyas' (mascots) that signify contemporary symbols of evil. Apart from these, people organize various cultural activities including dance, drama, etc., while women prepare the best of the region’s delicacies during this time.

Marbat is celebrated a day after the bullock festival of 'Pola' every year, which falls during August or September.