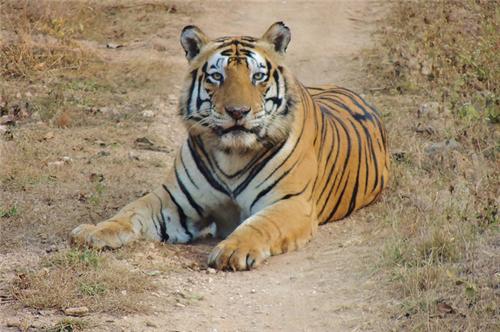 In a nutshell
Latitude – 21 degrees 26 ‘ N
Longitude – 77 degrees 11 ‘ E
One of the most famous wildlife reserves in the vicinity of the city of Nagpur, in the state of Maharashtra, is the Melghat Tiger Reserve. With its name rightfully sourced from the phrase ‘meeting point of ghats’, Melghat lies ensconced in the Southern parts of the Satpura Ranges. Established as a wildlife sanctuary and subsequently converted into a full fledged tiger reserve under the Indian government’s ambitious ‘Project Tiger’ initiative, Melghat presently covers an area of nearly 1700 square kilometres.
Major rivers flowing through this area – Khapra, Sipna, Dolar, Gadga, Khandu
Flora – Overwhelmingly dominated by Teak
Fauna - Dominated by tiger, sloth bear and leopard. Other prominent forms are Rhesus monkey, wild dog, sambar, mouse deer, python, flying squirrel, blacknaped hare, pangolin and porcupine.

Readers are most likely to find the mention of Melghat in the accounts of the Imad Shahi dynasty, established in Berar in 1484, and made accessible to invaders from the north by the numerous hilly passes that dotted the Melghat region. A more contemporary historical perspective of Melghat is available in the history books which mention the Duke of Wellington’s (Colonel Arthur Wellesley) stratagems to win the Second Maratha War in 1803 – Melghat was integral to the Duke’s ingenious plan to capture the Gawilgarh Fort from the Maratha stronghold.

How to reach the Tiger Reserve

Tiger conservation and preservation of wildlife habitat had become a burning topic for discussion by 1970. The Indian government, in consultation with various state governments and the Indian Board of Wildlife, constituted an administrative task force that recommended the creation of nine tiger reserves at various places in the country. Melghat was one of those nine, and the first tiger reserve to be created in the state of Maharashtra in 1974. The creation of these nine tiger reserves was one of the first activities conducted under the ‘Project Tiger’ initiative.
The reserve is divided into three regions, for the purpose of facilitating efficient management – Core Zone, Buffer Zone and Multiple Use Area (MUA). The Core zone is completely freed from villages and settlements, most of which in the Buffer Zones and MUA. Inhabitants of these villages, numbering to 61, mainly belong to the Korku, Gond and Gawali tribes.
Tourists generally visit this place to bask in the magnanimous union of hills, rivers and wildlife - for there are very few places in the whole world, where these three aspects of Nature can be found existing in such harmony.