Zero Mile Stone is the point of measuring the miles in India, and is located in the center of India, in the city of Nagpur. It is located in the south east direction of Vidhan Bhavan in Nagpur. This is in the center of geographical area of India. People from the entire states visit to Zero Mile stone and it has become the major attraction for the visitors who come to Nagpur for their vacations. British people erected the zero mile stone that use it to measure the distance from all the locations. They measured Nagpur to be in the center of India. They had the plan to make second capital of India to Nagpur, because of it was located in the center of the country. It is made of a pillar and four horses which are prepared from sandstone. The each horse shows a cardinal direction.  In 2008, the Times Group, took the initiative for the maintenance of the monument. 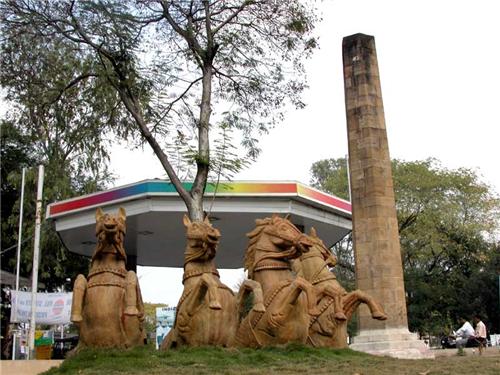 Visiting the Zero Milestone in Nagpur

Whenever people come to Nagpur, they go to see the Zero Mile Stone. It is very old pillar made of stone and built by British to mark this place as the center of India.  The Marker was located in the Central Nagpur city beside the busy road of Nagpur and it had preserved into a very small garden around it. This place is very significant and is obscure purely in the sense; there is no indication of locating the spot. People who go to Nagpur always make this a point to be a peek at this stone pillar. This palace is very much important but still unknown for a lot of people.

Changes in the Zero Mile Stone

Few young people from the city want to change and bring it to the structure importance which is due.  They have provided a lot of concepts for the development of the area by zero mile stone.  They want to develop and maintain the surrounding area of zero mile stone in such way, so that existing beauty and structure of this monument do not lose the importance and attraction of this place. And they also don’t want it to convert into park but should be into a small space where few people can come and enjoy.

There is no data about how many people are visiting the Zero Mile stone but the number is quite high.